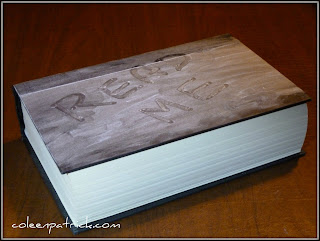 This image above - this is how my blog must be feeling right now - neglected, almost forgotten, lying below a thick layer of dust, weeping. I haven't seen the dashboard in ages. I haven't visited any blog in a long time. I don't even remember what I wanted to write about when something really touched me. This was not the case earlier. Back then, I remembered everything too well. I used to create a blog post in my mind while travelling, reading or even working. It used to give me a kick when I met someone interesting and he had a lot to offer that could make a brilliant blog post.

And now, today, I have to think before writing anything. Not that I don't have any subject left. But there is no motivation to blog. I love to write here, about any damn thing, without thinking or expecting any comments, opinions or views about the post. I love comments. It feels good when people read you and leave a comment behind. But since I have been so irregular here, I do not expect people to read me regularly.

Apart from being busy, I have been in a very "sorting out everything" mood. This includes from small things like books and mail accounts to big things like work and finances. I have never been a kind of person who will have fancy savings. There was a time when I had a good enough bank balance. But not anymore. I invest some money if I feel like, or just spend them. I get a lot of gyaan as to how I am simply wasting my life. But buying a fancy watch makes me happier than having some security in my bank account. I would rather take my mom out for shopping than buy some shares regularly. Yes, foolish. I know. But I had good enough savings. Enough to survive for 2-3 years easily. But I lost it overnight. Had I spent that, then probably I wouldn't be thinking about that even today.

To each one's own when it comes to savings and spending. Neither will take you anywhere. Or it might just take you somewhere, who cares. Life is all about living. Go live it the way you want to, for you might not be alive to see what happens tomorrow.

Enough of ranting for now. I am soon going to write about my experience at Wagah border. But when I am in mood and I have some time. Until then, nothing!

Email ThisBlogThis!Share to TwitterShare to FacebookShare to Pinterest
Labels: Rants

16th December was a very sad and shameful day for our country.  One girl was gang-raped by 6 men and thrown out of the running bus. I tried to write the details and the state of her when she was thrown out, but couldn't. Most of the people know her story anyway. She has been given many names - Nirbhaya, Amaanat, Daamini - but she will always be remembered for whatever she went through in those fourteen days that she was alive. She will always remain anonymous, yet the most popular person.

Three days before her death she was shifted to a hospital in Singapore for organ transplant. Her intestines were beyond repair and her liver was damaged too. When they moved her to Singapore, she was brain dead already. She finally breathed her last on the 29th early morning.

So many questions are still haunting me about this whole incident. First one - why was she taken to Singapore of all the places? Yes, that was the closest and European countries would have taken a lot of time to reach. But why transfer her at all. And if her transfer was necessary due to lack of facilities in our capital city, then why didn't they think of Mumbai? What I have known is that people from UK and US come to Mumbai for major surgeries including organ transplant, for it's cheaper and equally good.

Medically, a brain dead person IS dead. Was this just a diversion tactic to move her away from Delhi so that they could declare her dead? I am sure the Government would be expecting riots if she were still in Delhi. Why Singapore? Until recently, I didn't even know that it was popular for organ transplant surgeries.

Post her death, there have been many rallies - peace rallies. She was not the first victim of rape, and she has not been the last one too. After her, a few more incidences of gang rape have come out. People are trying many things to prevent this. They have been suggesting various things like ban republic day celebration, don't celebrate new year (don't know how many actually wasted their new year party pass worth a few thousands), declare a bandh and what not. And such an attitude surprised me.

It was indeed a very sad incident. But what I don't understand is - does banning/not celebrating a particular day change anything? Can't we fight things with a smiling face? Can't we continue doing things we like as well as do our bit to make things better? Being happy doesn't mean you are not sensitive towards things. Taking away someone's right to celebrate is not the solution. one MLA is talking about naming a flyover in her name, one politician is talking about awarding her an Ashok Chakra. Did she fight for the nation? No. Was she in Military? No. Then why Ashok Chakra? And why only her? So many girls die after being raped, but just because things don't come in the limelight, we will conveniently ignore them? And if mourning is the ideal thing to do during such times, then the country will mourn every single day!

The solution is not in banning a day, or declaring a bandh. First thing - strict laws and speedy trials. Why do we take ages to finish one case? And why does the culprit get up to 10 years of imprisonment only? The solution lies in educating people, spreading awareness. Most of the rapists don't even have access to newspapers/televisions. All they must be getting to know is - this girl died and the culprits are famous. It's enough for them to commit a similar crime. All of us have to be a bit alert. Notice people around you. If you find anything unusual about them, report it. If there is an incident of eve-teasing, go file a complaint. Your one step can save one or more lives, including that of yours. Each and every person has to prepare oneself to fight this. There is some hope then.

Again, by this post, I am not saying no to mourning or feeling sad. Everyone is sad. But sadness won't be reduced by curbing happiness. We all need to be happy. We all need some reason to celebrate. And that never becomes a barrier in the good deeds we intend to do.

Yes, she suffered a lot, something unimaginable. It was too cruel and nobody deserved such a painful death. The most important thing she did was that she managed to awake this nation, and united everyone for one cause. Fight for it, but don't limit it to one girl who lost her life. Make her your motivation and fight for safety. Abide by laws first. Say no to tinted windows and glasses. This law is there for a reason. Follow it. Respect women. It doesn't cost anything. If your friend calls a girl who is passing by "maal", tell him to learn to respect women. Do such things than outraging about celebrations.

Help out NGOs. Talk to victims. They need care and attention. Go attend peace rallies, but if you can invest that time in helping some victim or educating someone, it will be better than attending the rallies and peace marches.

A couple of months ago, Haryana Khap leader said that food like chow mein causes rapes. Two days ago, Yo Yo Honey Singh's song became a huge issue as its lyrics were offensive and the Government thought that it caused rape. The song was not even popular until then. The Government declared that they will give fifteen lacs to the Delhi rape victim. Her parents want a law to be named after her, and not flyover, in her honour.

Yes we live in this country. And we have such leaders. I have not mentioned anything about our media. That's another story altogether. Another post, or two or more.