You travel to various places, meet people en route, share a few moments with them or maybe spend a few days with them and those memories last forever in your mind. People say that it's all in our destiny to meet people. You just accidentally happen to meet someone who turns out to be very helpful to you and makes your trip easier. Sometimes you travel to remote villages of India where there is no electricity supply too. People give you shelter in their home, they give you food they are eating and wouldn't even take any money from you.
I have met many such people too, just like most of you. We Indians are friendly by nature. We love to talk to strangers, make new friends and create that comfort zone for us wherever we go.
But have you ever travelled to meet someone you have just heard of? Some friends visit a place, come back and share the stories with you. Stories about the places and people. A similar thing happened with me too. A few friends visited Pachmarhi - a hill station situated in Madhya Pradesh. They came back with a story about a lady called Ambika. That's not even her real name. Nobody knows her real name. She sits in a Mahadev temple near Pachmarhi and chants shlokas (Sanskrit Verses). And when she chants, her voice echos everywhere. The temple is located on a small hill. You have to climb the hill to visit the temple. The lady sits somewhere en route.
Now, this much information was enough for us to zero on the destination. We were already planning a trip to Madhya Pradesh. We decided to include Pachmarhi in our itinerary just to meet the lady and see how she manages to make her voice reach the whole hill.
When we hired a Gypsy to go to the temple. When we reached near the hill, we could hear a distant voice - something that could be heard very clearly in spite of the non-stop chattering by people around the temple. You will not believe me unless you visit the place yourself and experience this.
We started to climb the hill and the voice started to become clearer. It was loud and crisp. You can feel it touching your soul. I am not a religious person, but there was something magical about the way she was chanting the mantras. You feel like visiting the temple only because you get a feeling that some energy out there is giving her the strength to chant and make herself heard everywhere. After walking for 15 odd minutes, we reached where she was sitting. 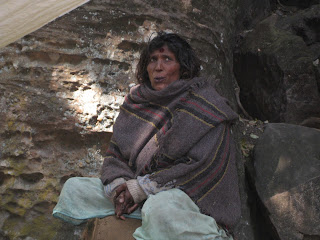 That's Ambika. She doesn't talk to anyone. She just chants. People have come and visited her, tried to take her interviews, but they get information from people sitting around her, selling Rudraksha and other things. People shoot her chantings, take her pictures. And nothing of these distracts her. She continues to chant.
Nobody knows who she is. She has been sitting there for the past 27 years. She stays there. That rock is her home. Nobody knows anything about her. Nobody wants to know anything either. She is an integral part of the temple and its heritage. She is the soul of that place. God gives her strength to go on as her voice is a part of the nature. Nobody knows how old she is. And her age doesn't change anything about her voice or the tempo.
Go and meet Ambika to believe me, my story. And you will not regret this trip - my promise.


This post has been submitted for the “Around the World with Expedia” contest organized by Indiblogger in association with, Expedia.
Posted by Neha at Tuesday, February 28, 2012 33 comments:

Had I written this post two years ago, I would have attracted at least 100 bashing comments on this space. But these days, even the most controversial topic gets a mere 100 page views, which means 5 comments which are from people I know very well. Some time back, I used to nag them and force them to read my post and leave a comment. But these days I have stopped that too. When I get a new comment notification which is once or twice a day, I remember it then that I had written something one two days ago.
Earlier, my routine was - switch on laptop, log in to gmail, open blogger, moderate comments, check dashboard, read the new posts, comment there and then start the daily work. But these days I open blogger once in two three days. Comments can be directly moderated through gmail. This means the workaholic lazy me doesn't bother to check the blogger dashboard at all.
Anyway, this post is not at all about how pathetic you think I am or how awesome I know I am; but it's about a war.
Now, whenever I think of a clash between two rivals, the first few things come to my mind are- India and Pakistan cricket match, Australia-England cricket match (though it's not as popular as India-Pakistan, but observe Tony Greig closely when they clash and you will know what I mean), Nadal-Federer clash, Manchester United-Chelsea chash, SRK-Aamir clash - the list is entertainingly superb. One such rivalry is between Mumbai and Delhi too. Worse than some of the encounters mentioned here.
It so happens that Mumbai and Delhi are two of the biggest cities of India. I have no idea how the war started between the two, but it doesn't take long for any of them to make fun of the other. Some of the things are hilarious, some claims are superb. Delhi is called as the hub of rapes, while Mumbai is supposed to be one of the safest cities.
Now I have not lived in Delhi for more than a week, thus I cannot really comment on it, nor am I gonna speak high of Mumbai just to make this post controversial, but all I am going to write about is whatever funny, amusing and insulting things about the cities written at different places.
This year around, Mumbai saw winters. Real winters. The temperature dipped down to 8.5 degrees. And it has been too windy because of which it becomes impossible to commute by an auto without a jacket. Many people posted about how cold it was in Mumbai. Of course Delhi people thought that Mumbai guys were exaggerating and they couldn't take the little cold. It has been around 3 degrees in Delhi. But what they failed to see was that we have NEVER ever seen the winters. We sweat 24x7, 365 days. It's impossible for us to survive without fans/air conditioners. For us, this WAS cold, damn cold. Sitting in your house in Delhi wouldn't have given you any idea, nor visiting this place after staying in 3 degrees.
One funny remark I read on this was - Mumbai people, what you call cold is "let me go out in full pants instead of shorts" for us. To which someone replied - yeah, your floods are drizzle for us, big deal. I was laughing my heads off after reading this remark. How funny it is when people want to prove how superior their city is.
Another one was about summers - when someone said that Delhi people are so unlucky. They can neither come out during day in winters due to extreme cold, not in summers due to heat strokes. A night, only men can move out as ladies get raped. The counter attack for this was the murders and underworld of Mumbai and how pathetic the crowd and eve teasing was in Mumbai too.
But what took the cake was the Metallica concert which got cancelled. How people attacked one another at that time. Mumbai people calling Delhi guys irresponsible while Delhi guys calling them unfortunate not to even have had a concert there.
And the clothes - Delhi people are more brand conscious than Mumbai people. Mumbai people are more helpful and friendly than Delhiites. Who is more cool, who spends more, amazing Delhi weddings, paani puri vs golgappa, batata vada vs bonda, kanda vs pyaaz and what not. Phew.
But it's still always amusing for me. I really don't care about how superior or inferior my city is. The only thing I don't like is that people overreact most of the times. They can't take a joke on themselves. And if I was as popular now as I used to be, then you would have known what I exactly meant.
So people, peace. This is just an observation. I do not intend to hurt anyone. I love my city as much as you love yours. Read the post neutrally and you may, just may like it in spite of my awful style.
Posted by Neha at Monday, February 13, 2012 46 comments:

The other side of life

If there is one state of India that I have explored the most - it has to be Maharastra. From Maharashtra-Gujarat border to Maharashtra-Andra Pradesh border - I have visited almost all the districts. I have lived in big cities, small villages, towns, farms, huts; slept on floor, terrace, under the sky, among the hills. It has always been a different experience, and with each place, the feeling of coming close to visiting the whole of state you live in is great.
A month or so back, I made two short trips to small villages of Maharashtra called Lonore, Varoshi and Parkhande. These are small villages where there are plenty of agricultural plots, and I had gone there for an official visit. Some legal work which involves site visit and inspection. I will not go into the legal part, but the places were beautiful. 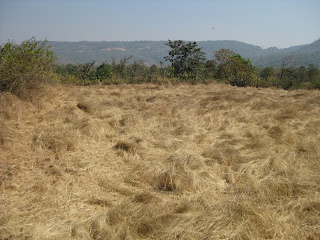 The image above is the plot that I visited in Lonore. This is how a typical piece of land looks like in most of the places in this season. 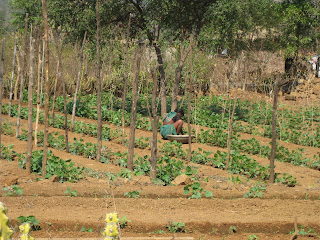 The lady is growing vegetables in the backyard. They use some for home and sell the remaining in the market. 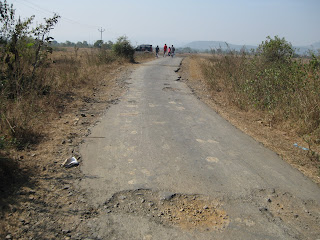 The typical kacchi sadak that takes you to those plots. 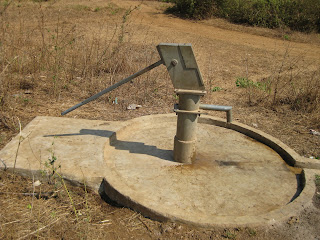 The hand pump. Rustic memories. Soul of a village. It carries so many stories for so many of us. There was one hand pump right behind my school in Umbergaon. I have seen a few in other parts of Maharashtra, but none in Mumbai. Since it reminds me of my childhood, it will always remain special. This was at Varoshi. 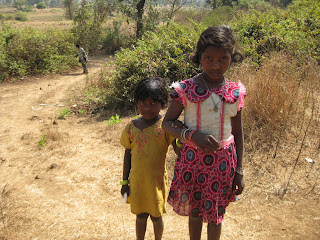 That's Pinha in yellow and Mangli in white and pink. Met them at the site. Since the time I clicked them, they were roaming around me with the curious expressions on their face and hopes that I would click more pics. And I did. Each time I showed them the clicked picture, their eyes would lit. Since it was a work visit, I couldn't click much as I was talking to the local people too. 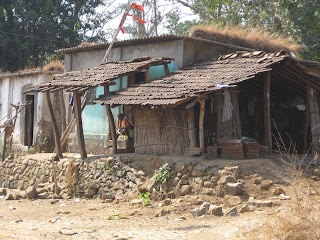 This is where those kids stay. Their grandfather gave me a lot of information.
And that was it - two visits in those places. I am not a professional photographer, so the clicks will neither be edited nor be nice. They are random and work related in most of the cases. Still they manage to remind me of what I want to remember. Fair enough!
Posted by Neha at Wednesday, February 08, 2012 28 comments: