Blogger has new interface. Which is as pathetic as any other new interface social sites come up with from time to time. We whine about that initially and then forget about it until the next change. But the biggest disadvantage of this blogger interface is that I no longer feel like visiting my dashboard. Each and every feature looks so very confusing. I just cannot identify the blog posts anymore. The only good looking aspect is 'new Post' feature. The page gives me a feel of a paper. It's good to write here. This is almost a review. For this, Blogger should pay me or something.

In other news, I have finally shifted to an android phone after using blackberry for around two years. Not that I was unhappy with blackberry, but it was almost dead. I anyway don't use mobile phone much. I rarely call up people or text them unless it's urgent. If it wouldn't have been for my mother, I would have deactivated my phone by now.

And I saw Barfi. I had seen the hype around it and I didn't want to have any biased views for it before even watching the movie. So I saw it on the first day, second show, alone. And I am glad I did so. It was a treat to watch - awesome performances, simple story, though slightly long. But it didn't drag. Even though I saw it alone, I didn't get bored. I think I am in love with Ranbir Kapoor.

It's been hectic at work too. After the lazy monsoon, it's now time for extra lectures and meetings. Two new batches, some very interesting students, new clients, new places - many things are happening at the same time. Weekends are busy too. Earlier, I could never digest the funda of going out on weekends. I used to find it weird when people made weekend plans religiously, and went out every weekend. And it's still not a very common and popular thing in India. But it's addictive. It's been almost a year since I have been going out on weekends. Now one day at home and I become restless. Sigh.

November, January and February are travel months. I am going to be visiting Delhi-Agra, Muzaffarpur and Udaipur for friends' weddings. Another trip to some other location for a vacation might materialize too. Yes, like most, we are good at planning stuff too. But seldom something gets materialized. And they have always been the last moment plans.

I talk on my blog. It's almost become a personal log. The only missing thing is two words in the beginning of the post - "Dear Diary".
Posted by Neha at Tuesday, September 25, 2012 7 comments:

Warning: This is a long and boring post. It doesn't have anything that will interest you in all probabilities. It's not even funny. It can't be, for I cannot write humour. Or maybe I can. People call my style of humour "Dry Humour". Usually not many people understand that. Thus it's a convenient term for people like me who like to be funny but are not really funny. Am I making sense? Do I ever? Haven't I lost you as yet? If not, then you might as well read the post!
A few days ago, someone told me that I was too self obsessed. It was more like a reminder than a realization for me. I am self obsessed to a greater extent. And I have said this on blog too. My status updates make it obvious as well. But so what? What's the big deal about it?
No big deal so far as I remain sane. In order to prove my superiority over others, I don't ridicule them. And I know too many conceited people who pull down others just to prove themselves the best among all. I am too impatient to deal with such sorts, but some people are too close to you to even ignore. I have dated extremely conceited guys. There came a point where I was known as a jerk magnet. I got this title a year ago, but I have been one since the time I started dating. I just never realized this or never wanted to accept it - either ways, that's how it has always been.
No, I have not been unlucky always, but on most of the occasions. My biggest problem has been that I cannot say no. I am that crazy, stupid, hopeless romantic minus the romantic bit who does anything and everything for the person she loves. And that's a very easy thing to do if I am with a simple person who is not a self proclaimed asshole. But me being me, I have usually ended up falling for an asshole. Not that I complain, for I don't think I can survive with a nice guy anyway.
Things go out of hand when one falls for a narcissistic asshole. Yes, I am narcissistic too. If you are lucky, you are friends with me on facebook. Yes? Then go and check my status. That shows the height of narcissism. But I do it purposely at times. Just to annoy some people. Attention seeking acts are more than the purposefully annoying ones, and there is no doubt about that; but I have never been an extreme narcissist.
Now, after encountering a few people (friends including) who had the extreme narcissism symptoms, I did a bit of research on this. And it turned out that there is something called as Narcissistic Personality Disorder (NPD). I read the symptoms and I could identify with those with respect to few of the people around me. And I was surprised to know that it was not something very rare. Not too usual either, but these people were not difficult to find. And what's worse, they were too conceited to even listen to someone who wanted to tell them that they were flawed, for they could never believe that. They were just perfect according to them, and that was their disease.
I have never ever written such a personal post here. But there are days when you want to vent out. You just want to write whatever comes to your mind. And this topic has been playing on my mind for years now. But I never thought of writing about it. I just started to scribble something random here, and while talking to you know who, I thought of this quote: "Some relationships don't work because both of them love the same person." and wrote the post.
If you know someone who suffers from NPD and that person happens to be someone close to you, especially your partner, then God bless ya!
Posted by Neha at Tuesday, September 18, 2012 5 comments:

It's surprising how the mind works. At times I don't even realize the kind of stories it creates without my permission and control. The stories are hopeful and shattering at the same time, but they are stories, created when mind is idle, or when it's too occupied to even think or make sense. Still it manages to create them, almost mechanically.
Don't try to find any logic in whatever I have written. It's one of those blabbering moods. I want to talk a lot right now, but I don't know exactly where to start and what to talk about. There is a lot to say and nothing to express. Or maybe it's the other way round.
There are times when you are not in mood to write anything, and at times you want to write but you don't find right words to express what you are thinking about. At such times you come across something written somewhere. It might be a quote or a write up or even a picture. It's easy to share such things, but when it's a blog post that you have liked, merely sharing a link of it doesn't serve the purpose. You want it on your blog too. I wish a Re-blog option was there for blogger as well. 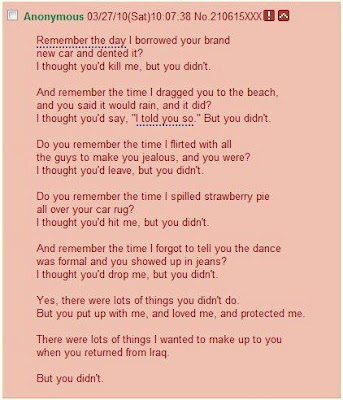 Like this image. I can always upload it here and share. But I would prefer to re-blog it from the original source just to maintain its essence. It would be much more meaningful to share the first ever post created for this image. It might have been a blog post converted into an image, or a letter - anything.
And I wish I could re-blog this - http://www.themisfitgirl.com/2010/12/catharsis-part-viii-from-across.html.
Posted by Neha at Wednesday, September 12, 2012 8 comments: